CAL International are proud to have received the Bronze award from the Armed Forces Covenant’s Employer Recognition Scheme. The award acknowledges employers who have provided exceptional support to the armed forces community and defence by going above and beyond their covenant pledges. 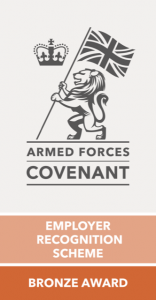 The Armed Forces Covenant is a pledge that together we acknowledge and understand that those who serve or who have served in the armed forces, and their families, should be treated with fairness and respect in the communities, economy and society they serve with their lives. The covenant focusses on helping members of the armed forces community have the same access to government and commercial services and products as any other citizen.

The 3 tiered award system is a way for the Ministry of Defence to publicly thank and honour organisations for their support. Companies awarded the Bronze award must have signed the Armed Forces Covenant and must promote being armed forces-friendly. This includes being open to employing reservists, cadet instructors, armed forces veterans (including the wounded, injured and sick) and military spouses/partners.

The Covenant supports veterans, service leaders and their families and is fulfilled by a wide range of groups. These include charities, local government, communities, businesses of all sizes, central government, cadet forces and single services. 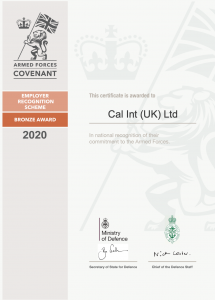 CAL International is a concept to production engineering company based in Knowsley, Merseyside. For more information about us and our services: