All About the Invention of the Telephone

All About the Invention of the Telephone

The Invention of the Telephone

The invention of the telephone, which is a part of our everyday lives now, was a culmination of work done by a number of individuals over many years. What some people may not know is that it lead to an array of lawsuits in relation to patent claims from several individuals and numerous companies. 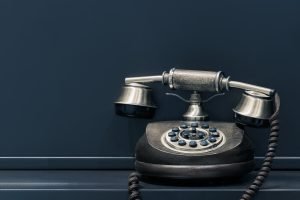 The concept of a telephone dates back centuries to the ‘string telephone’, made up of two diaphragms connected by a string or wire. A classic example of this is the tin can telephone, which works by sound waves being carried as mechanical vibrations along the wire from one can to the other.

In 1876, both Alexander Graham Bell and Elisha Gray submitted separate patent applications for telephones to the patent office in Washington on the 14th of February. As he was in Boston at the time, Alexander Graham Bell was represented by his lawyers and supposedly had no idea that the application in his name had been submitted. According to Ericsson, Elisha Gray’s patent application arrived at the office a few hours prior to Bell’s, however his lawyers insisted on paying the application fee immediately, resulting in his application being registered by the office first.

Bell’s patent was approved and officially registered on the 7th of March 1876. Famously, three days later a call is said to have been made from Alexander to his assistant, summoning him. This call, said to have been “Mr Watson, come here. I want to see you”, confirmed that his invention worked. 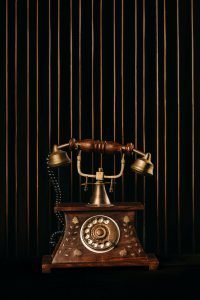 Questions were raised as to whether Alexander Bell was inspired by Elisha Gray’s design or vice versa as the water transmitter described in Gray’s caveat was astonishingly similar to the telephone transmitter Bell tested in March of 1876.  Although he did not use the water transmitter in later telephones, evidence suggests that the lawyers representing Bell may have gained an unfair advantage over Gray.

In June 2002, a resolution of the US House of Representatives claimed that Alexander Bell had nefariously obtained and exploited a piece of apparatus, the “teletrophono”, which was actually invented by a man named Antonio Meucci long before Bell and Gray.

In the 1880’s, the American Government initiated proceedings to charge Bell with ‘fraudulent and dishonest conduct” after evidence proved that Meucci’s material had mysteriously disappeared from the lab which, coincidently, Alexander Bell was carrying out his experiments. The Government claimed that Bell’s patent should be revoked, however the proceedings were not continued following Meucci’s death in 1889 as well as the expiry of Bell’s patent in 1893.

Bell was born in Edinburgh in 1847 and from an early age he displayed a curiosity about the world, gathering botanical specimens and running his own experiments. At the age of just 12, Alexander designed and built a homemade device, combining rotating paddles with sets of nail brushes to create a simple dehusking machine which was put into operation at their neighbour’s mill and used for a number of years.

It is reported that Bell’s fascination with telephony came about because his father, grandfather, and brother all worked in elocution and speech and both his mother and wife were deaf. This profoundly influenced his life’s work.

The Bell family moved to Canada in 1870 and two years later Alexander Bell’s father, Alexander Melville Bell, was offered a job teaching at a school for the deaf in Boston. Instead of taking the job, he recommended his son for the post, which was accepted. At this time, Bell and his father were working together to try to figure out is there was a way in which sound might be able to be made visible for the deaf through telegraphy.

Although most famous for the invention of the telephone, Alexander Graham Bell’s interests and work was widely varied. He had 18 patents granted in his name and a further 12 that he shared with collaborators. His work included aerial vehicles, selenium cells, a photophone, a metal jacket to assist in breathing, a device to locate icebergs and work on finding alternate fuels.

How the Telephone Works

Sound travels through the air as invisible waves, transferring energy from something that vibrates (such as the skin of a drum) to our eardrums.

When some one speaks into a telephone, the sound waves created by them enter the mouthpiece and then are carried by an electric current to the telephone of the person they are talking to. A telephone has two main components, a transmitter and a receiver. The transmitter has an eardrum which is a thin, round metal disk called a diaphragm. The sound waves from a person talking into a telephone strike the diaphragm, making it vibrate. It vibrates at different speeds depending on the variations in air pressure caused by the varying tones of the speaker’s voice.

Behind the diaphragm there is a small cup containing tiny grains of carbon. The diaphragm presses against these grains and low voltage electric current, which comes from batteries at the telephone company, travels through them. The pressure on the carbon grains varies as sound waves make the diaphragm vibrate. The either crowded or loose grains cause the electric current to become stronger or weaker. This current copies the pattern of the sound waves and travels over a telephone wire to the receiver of another telephone.

The receiver of a telephone contains vocal cords, which are also a diaphragm. Two magnets at the edge of the diaphragm, one a permanent magnet that holds the diaphragm close to it and one an electromagnet, cause it to vibrate. The electric current passing through the electromagnet becomes stronger or weaker according to the loud or soft sounds. This causes the diaphragm to vibrate according to the speaker’s speech pattern; as it moves in and out, it pushes and pulls the air in front of it. This pressure sets up sound waves that are the same as the ones sent into the transmitter which strike the ear of the listener and they subsequently hears the words of the speaker on the other end. 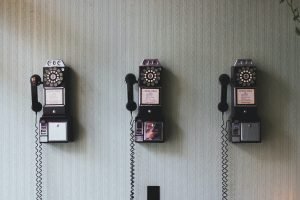 The telephone is an amazing piece of engineering which has progressed endlessly since its invention in 1876. Without innovative engineers and inventors such as Alexander Graham Bell and Elisha Gray, the world we know today may have been very different. If you have a famous invention or engineering feat that you would like to learn more about, comment on our social media post and we will try to cover it soon!