All About the Invention of the Cat’s Eye

All About the Invention of the Cat’s Eye

A cat’s eye (sometimes known as a road stud) is a retroreflective device used for safety in road marking whose design originated in the UK in 1934 and has since been used all over the world. 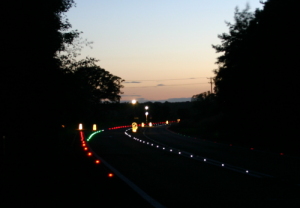 A key, innovative feature of a cat’s eye is the flexible rubber dome it has which is sometimes deformed by traffic travelling over it. A fixed rubber wiper actually cleans the surface of the reflectors when they sink below the surface of the road, keeping them constantly clean and efficient. Cat’s eyes are particularly valuable in fog and dangerous driving conditions and are largely resistant to damage from snow loughs or other large vehicles.

The inventor of the cat’s eye is Percy Shaw and the name of it is said to come from his inspiration for the device, the reflection from the eyes of a cat. In 1934, he patented his invention and on 15 March 1935, he founded his own company in Halifax, ‘Reflecting Roadstuds Limited’ to manufacture them. The name ‘Catseye’ is their trademark.

The value of Shaw’s invention became even more evident in World War II due to the blackouts and the shuttered car headlights which were in use then. This time also helped popularise their mass use in the UK. After the war, the invention and Shaw’s company received firm backing from the Ministry of Transport and eventually, their use became universal.

Currently the United Kingdom, different colours of cat’s eyes are used to denote different situations. White is used to indicate the centre line of a single carriageway or lanes in a dual carriageway and red or amber is used for lines that should not be crossed (red for the left side and amber for the right side of a dial carriageway). Green cat’s eyes are used to indicate a line that can be crossed, for example a lay-by or slip road. 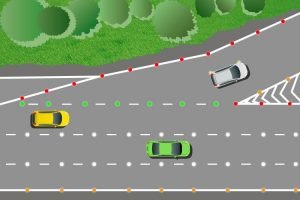 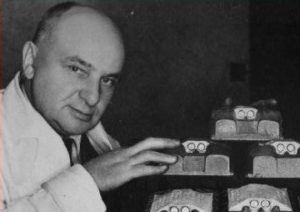 Percy Shaw was born in Halifax in the West Riding of Yorkshire on the 15th of April, 1890. He was educated at a boarding school and then began working as a labourer in a cloth mill at the age of 13. Following this, he became apprenticed to a wire drawer, but the low wages were unattractive to him and so he soon took on a series of unskilled jobs in local engineering works. After this he joined his father in a new business which repaired small machine tools used in munitions production during the First World War.

His father died in 1929, and following this, Shaw started his own small business as a road contractor, repairing roads until his death in the 1970s.

There are a number of different stories about how Shaw came up with the idea of cat’s eyes, the most famous of which was him driving back to his home in Halifax down a difficult road with a very steep drop to one side. Whilst driving, a cat on a fence along the edge of the road looked at the car, reflecting his headlights back to him, allowing him to remain on the road.

The firm that Percy Show created grew in size making more than a million roadstuds per year, which were exported all over the world. The invention of the ‘cat’s eye’ was deemed such a success that Shaw was rewarded with an OBE for services to exports in the birthday honours list in 1965. 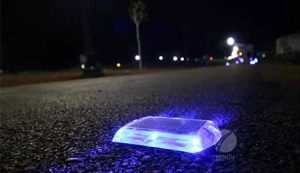 In 2006, the cat’s eye was voted one of Britain’s top 10 design icons in the Great British Design Quest organised by the BBC and the Design Museum. The list included some amazing famous designs such as the Concorde, the Mini and the World Wide Web.  The cat’s eye being featured here shows just have valued the invention is and we may all forget how integral to society and our safety they really are.