All About the Invention of the Christmas Cracker

All About the Invention of the Christmas Cracker 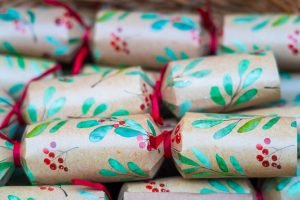 Christmas crackers are festive table decorations that make a ‘bang’ sound when pulled apart and most contain a small gift, paper hat and a joke!

Crackers have become commonplace at Christmas over dinner and have been around for over 150 years.

The tradition of wearing a festive hat is believed to date back to Roman times and the Saturnalia celebrations, which also involved decorative headgear.

The cracker was invented by London-based confectioner and baker, Tom Smith (1823-1869), who set up a shop in Goswell Road, Clerkenwell in the 1840s. Initially, Smith created wedding cakes and sweets and then on a trip to Paris he discovered the French ‘bon bon’, which provided a hit at Christmas time. To encourage year-round sales, Smith then added a love motto to the inside of the wrapper.

The inspiration behind the ‘pop’ or ‘bang’ supposedly came from the sound of a log fire crackling. Smith patented his first cracker in 1847 and had perfected the mechanism in the 1860s. It is caused by two narrow strips of paper which are layered together, with silver fulminate painted on one side and an abrasive surface on the other. When pulled, the friction creates a small explosion!

In order to battle off any competition, their company introduced a range of different cracker designs and they were marketed for use as novelty at a number of celebrations. Walter, Tom’s son, added the elaborate paper hats and sourced novelty gifts from Europe, America and Japan. The cracker’s success enabled the business to grow and move to a bigger premises in Finsbury Square, eventually employing 2,000 people by the 1890’s including many female workers. 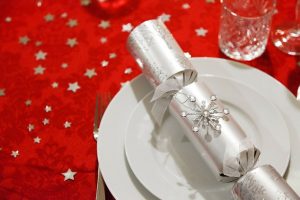 Initially, crackers and their paper hats were actually made by hand, involving cutting tissue paper with heavy guillotines, folding pasting, and carefully packing for the perfect presentation.

Over the years, novelty crackers have followed topical trends with writers being commissioned to compose snappy lines and jokes referencing popular crazes along with the artwork for cracker boxes. Crackers have not only been used to celebrate Christmas but were used to celebrate major occasions throughout history including the end of the First World War in 1918 and the 1926 World Tour by Price Edward.

Take a look at this amazing short film from 1910 which shows ‘Lion Head Brand’ crackers being manufactured in an Edwardian factory.

We hope you all enjoy pulling your Christmas crackers this year and when you do, have a think about how long the humble cracker has been around and how far it’s come!