The Invention of the Waterwheel

The Invention of the Waterwheel

At CAL International, we are fascinated by the inventions of integral pieces of technology throughout history which have shaped the way we live today. CAL’s specialist services include New Product Introduction and Design Innovation, meaning we love to take new ideas and concepts all the way through to production. Our invention series features some amazing inventions from throughout history, how they came to be invented and the ways in which they impact the lives of millions. Today, we explore the invention of the Waterwheel. 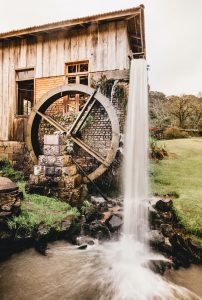 A waterwheel is a mechanical device which takes the energy from running or falling water using a set of paddles mounted around a wheel. The falling force of the moving water pushes against the paddles, rotating a wheel which is then transmitted to a variety of machines via the shaft at the centre of the wheel. Waterwheels are generally large and are composed of wood or metal with blades or buckets along the edge of the wheel in order to capture the power of the moving water.

The waterwheel was perhaps the earliest source of mechanical energy to replace that of humans and animals. They were first used for crop irrigation and for grinding grains as well as to supply drinking water to villages. Some were built near paper mills to help grind wood into pulp to make paper, while others were built next to mills to help mill flour. They were also used for many other purposes such as hammering iron, preparing fibre to make cloth and crushing ore.

Waterwheels were first invented and made by the ancient Greeks with the first reference to a waterwheel dating back to around 4000 BCE. Waterwheels then spread across Europe and were widely used by medieval times. The engineer Vitruvius, who died in 14 CE, has been credited with designing, creating and using a vertical waterwheel during Roman times. The horizontal waterwheel was then invented in China sometime in the 1st century CE.

After the fall of the Roman Empire, waterwheels spread throughout Medieval Europe, largely because of monks who introduced the technology to landowners, many of whom had lost workers to disease and war. Waterwheels were developed in England in the eighteenth century by inventors such as civil engineer John Smeaton (1724–1792) and engineer James Brindley (1716–1772). 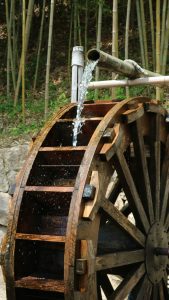 Most commonly, waterwheels are positioned vertically over a water source, meaning that the axle is positioned horizontally. The axle transfers the energy from the falling water to a drive belt or a system of gears that then operates a machine of some sort. These wheels require some source of falling or flowing water which can include streams, rivers and sometimes special ponds known as mill ponds which create a special channel known as a ‘mill race’ from the pond to the waterwheel.

Although waterwheels are not used widely today, hydroelectric dams function on the same basic principle of using the power of flowing water to move turbines. It is undeniable that the waterwheel and the energy it converts is one of the most important and innovative inventions to be developed in human history.