The Invention of the Mechanical Clock

The Invention of the Mechanical Clock

At CAL International, we are fascinated by the inventions of integral pieces of technology throughout history which have shaped the way we live today. CAL’s specialist services include New Product Introduction and Design Innovation, meaning we love to take new ideas and concepts all the way through to production. Our invention series features some amazing inventions from throughout history, how they came to be invented and the ways in which they impact the lives of millions. Today, we explore the invention of the mechanical clock. Clocks are an integral part of our everyday lives and a piece of engineering that we all take for granted. As technology has advanced, clocks have advanced too, however they are an invention which in some form, is still used by most of us every single day. 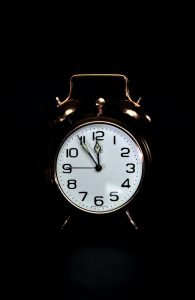 A clock is a device used to measure, verify, keep, and indicate time. The clock is one of the oldest human inventions, meeting the need to measure intervals of time shorter than the natural units: the day, the lunar month, and the year.

Between 1280 and 1320, there was an increasing number of references to clocks in church records across Europe, indicating that a new type of clock mechanism had been invented. The clock mechanisms that existed at this point used water power, but were now being adapted to take their power from falling weights. The controlled release of power here (the escapement) marks the beginning of the true mechanical clock.

These new mechanical clocks were intended for two main purposes: for signalling and for notification such as public events, as well as for modelling the solar system.

For clockmakers, building smaller clocks was a technical challenge, as was improving the accuracy and reliability of them. They could either be expensive, impressive showpieces demonstrating skilled craftsmanship, or less expensive, mass-produced items for domestic use. The escapement part of the clock was a very important factor affecting the accuracy of the clock, so many different mechanisms were tried.

Spring-driven clocks began to  appear during the 15th century; the earliest of which was the chamber clock given to Phillip the Good, Duke of Burgundy, around 1430. Early clock dials did not actually indicate minutes and seconds; a clock with a dial indicating minutes was illustrated in a 1475 manuscript by Paulus Almanus, and some 15th-century clocks in Germany indicated minutes and seconds. An early record of a seconds hand on a clock dates back to about 1560 on a clock now in the Fremersdorf collection. 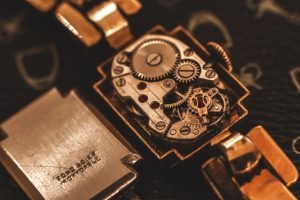 Mechanical clocks don’t depend on a battery to keep time but instead, they harness the energy stored in a wound spring. This is why all mechanical clocks must be wound to continuously keep accurate time. All mechanical clocks need energy in order to run. Winding a click manually winds an internal mainspring and when this slowly unwinds, it puts a series of other parts inside the click in motion, turning the gears. The escapement is one of the most important components inside a mechanical clock, which regulates the release of stored energy into a predictable curve, translating into the motion of the hands around the dial. 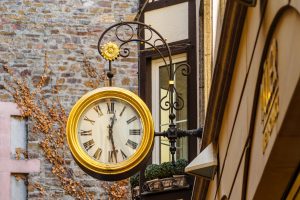 The oscillator is the final element in the escapement and is usually a balance wheel or pendulum. The rate o this is contact, meaning there is a controlled release of energy stored in the mainspring (or in larger clocks, the gravitational pull on a weight). Each swing of the balance wheel or pendulum releases a tooth on the escapement’s gear, allowing the clock’s gear train to advance by a fixed amount, thus moving the clock’s hands forward at a steady rate.

Clocks have advanced significantly since the wind-up mechanical clock, however the intricate engineering of mechanical and spring-driven clocks is fascinating and is an invention which has been adapted and used constantly around the world every day.