The Invention of the Refrigerator

The Invention of the Refrigerator

At CAL International, we are fascinated by the inventions of integral pieces of technology throughout history which have shaped the way we live today. CAL’s specialist services include New Product Introduction and Design Innovation, meaning we love to take new ideas and concepts all the way through to production. Our invention series features some amazing inventions from throughout history, how they came to be invented and the ways in which they impact the lives of millions. Today, we explore the invention of the refrigerator. Refrigerators, or ‘fridges’ as we more commonly refer to them, are such an integral part of everyday life in developed countries, and are appliances which we all take for granted. For the many of us who have always known a refrigerator in our houses, it is hard to imagine life before the invention.

A refrigerator is a home appliance that transfers heat from its inside to its external environment so that the inside is cooled to a temperature below room temperature, using a thermally insulated compartment and a heat pump. Refrigeration is an essential food storage technique in developed countries as the lower temperature inside lowers the reproduction rate of bacteria, therefore reducing the rate of spoilage of the food inside. 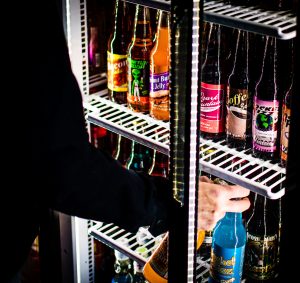 Commercial refrigerator and freezer units were in use for almost 40 years prior to the common home models. They used gas systems such as ammonia or sulphur dioxide, which made them unsafe for use in a home as these gasses occasionally leaked.

A common type of commercial refrigerator is the glass fronted beverage cooler. These appliances are designed for re-load conditions meaning they generally need to have a larger cooling system so that they can cope with a large throughput of drinks and frequent door opening. Because of this, it is common for these types of refrigerators to have an energy consumption of over 4kWh per day, with commercial refrigerators efficiency being primarily dependant on the compressor that moves.

Refrigerators for home and domestic use were first invented in 1913 by a man names Fred W. Wolf, from Fort Wayne, Indiana. His models consisted of a unit that was mounted on top of an ice box. In 1914, Nathaniel B. Wales, an engineer from Detroit, Michigan, introduced the idea for a practical electric refrigeration unit which later became the basis for the Kelvinator. A self-contained refrigerator, with a compressor on the bottom of the cabinet, was then invented in 1916 by Alfred Mellowes. Mellowes’s company was bought out in 1918 by William C. Durant, who began mass producing refrigerators with his company Frigidaire. 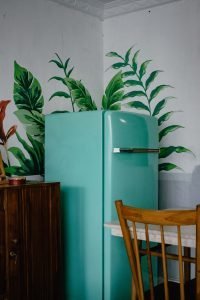 Many inventors and engineers had a role in the development of the refrigerator in the following years, but the first person to patent and make a practical compact refrigerator was Carl von Linde.

Home use refrigerators required installation of mechanical parts including a motor and a compressor in the basement or an adjacent room, while the actual cold box was located in the kitchen. By 1923, Kelvinator held 80% of the market for electric refrigerators and at the same time, Frigidaire introduced the first self-contained unit. About this time porcelain-covered metal cabinets began to appear.

The first refrigerator to see widespread use in a household was introduced in 1927 and was the General Electric “Monitor-Top” refrigerator. It was called this as, according to the public, it looked like the gun turret on the ironclad warship USS Monitor of the 1880s. The compressor assembly was placed above the cabinet and enclosed with a decorative ring. Over a million of these were produced and these with used either sulphur dioxide as the refrigerating medium (which is corrosive to the eyes and can cause loss of vision, skin burns and lesions), or methyl formate (which is highly flammable, toxic and harmful if inhaled). 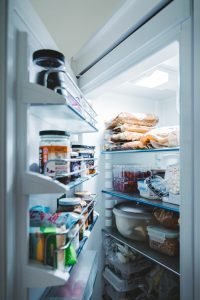 The introduction of Freon (which was a safer, lower toxicity alternative refrigerant) in the 1920s meant the refrigerator market expanded during the 1930s. Separate freezers then became common in the 1940s but these appliances did not go into mass production for home use until after the Second World War.

More efficient refrigerators were developed in later years in the 1970s and 80s, however Freon was found to be damaging to the ozone layer, so was banned in 1994. A less harmful replacement called tetrafluoroethane has been used commonly since 1990, however Freon is still found in many old systems today.

The history and engineering of the refrigerator is fascinating and goes back many years, however the concept is a simple one. This shows that, although it took years of engineering and trial and error to develop, sometimes a simple idea really can change the way people live globally forever.