The Invention of Fireworks

The Invention of Fireworks

At CAL International, we are fascinated by the inventions of integral pieces of technology throughout history which have shaped the way we live today. CAL’s specialist services include New Product Introduction and Design Innovation, meaning we love to take new ideas and concepts all the way through to production. Our invention series features some amazing inventions from throughout history, how they came to be invented and the ways in which they impact the lives of millions. Today, we explore the invention of fireworks! Fireworks are commonplace at many events throughout the year, especially on Bonfire Night and New Years Eve, but do you know what fireworks are made up of, when were they invented and how they actually work?

Fireworks are a class of low explosive pyrotechnic devices used for aesthetic and entertainment purposes. 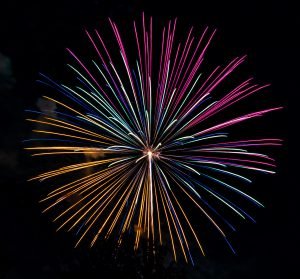 The earliest fireworks known came from China during the Song dynasty (960–1279), with pyrotechnicians in China being very well respected for their knowledge of complex techniques. During the Han dynasty (202 BC – 220 AD), legend has it that a Chinese alchemist mixed potassium nitrate, sulfur and charcoal to produce a black, flaky powder which was the first known form of ‘gunpowder’.  This powder was poured into bamboo sticks with people then throwing the stick into a fire to produce an explosion with a loud sound. In later times, gunpowder packed into small containers was used to mimic the sounds of burning bamboo. After this, grand displays of fireworks began to be held and in 1110, a large firework display in a martial demonstration was held to entertain Emperor Huizong of Song and his court.

Some time in the 13th Century, fireworks made their way to Europe, and began to be produced in Europe by the 14th century, becoming popular by the 17th century. The Italians were the first Europeans to actually manufacture fireworks, with European rulers liking to use fireworks in order to ‘enchant their subjects and illuminate their castles on important occasions’.

In 1786, Bertholet discovered that oxidations with potassium chlorate resulted in a violet coloured emission, with other developments then revealing that oxidations with the chlorates of barium, strontium, copper, and sodium resulted in intense emission of different bright colours. The isolation of metallic magnesium and aluminium marked another breakthrough as these metals burn with an intense silvery light. With these findings, modern coloured fireworks were invented in Europe in the 1830s and modern skyrocket fireworks have been made since the early 20th century. 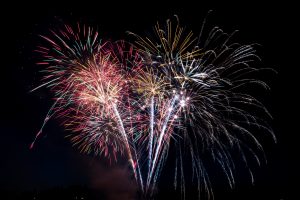 Fireworks explode because of gunpowder, and the most important component of this for a firework is potassium nitrate, which propels the firework into the sky. A fuse sets off a charge which then ignites gunpowder, sending the firework up into the air. 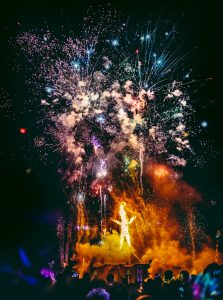 Once in the sky, more gunpowder within the firework ignites, causing the pyrotechnic ‘stars’ to explode, producing intense light when ignited. Stars contain five basic types of ingredients:

There are many different types of fireworks, which create different shapes and patterns in the sky, including:

Fireworks are commonplace globally at events throughout the year, such as New Years Eve, major sporting events such as the Olympics and the Super Bowl, and in the UK on Bonfire Night. They are a fantastic and exciting form of engineering which allow for a grand celebration and spectacle. The design and engineering of fireworks is always progressing with more extravagant and precisely designed displays each year around the world, including competitions for professional firework display creators!